I took in The Losers over the weekend, mostly because I had nothing better to do. It was about what I expected. Entertaining, stuff blew up, not bad but not great. I laughed some. There were insane and illogical action sequences. I enjoyed it. It had quite possible the worst opening sequence ever, involving a helicopter, a missile, and twenty-five school children. The Losers was based on a graphic novel, a medium in which many bad things often look better than they do when realized in live action. The helicopter/missile/cute kid combo on the big screen was kind of horrifying. That aside, I found myself thinking of a couple things while watching The Losers.

What is one step below “sexy beast”? If Robert Downey, Jr. and Jon Hamm are sexy beasts, and Jeffrey Dean Morgan is almost, but not quite, that—what is he? A hot animal? A desirable creature? This bugged me throughout the movie. Because Morgan (Watchmen, Supernatural) is kind of attractive. He has a rakish appeal and an almost sexy swagger. He’s grizzled but groomed, and in odd moments I found myself thinking, “Yeah, okay, I get it,” but then ten seconds later I was back to being glad he was keeping his shirt on. He certainly was a convincing tough guy, the leader who’s lost his way. But his spicy scenes with Zoe Saldana (Avatar) were…weird. She is SO MUCH hotter than him. I kept wondering why she was bypassing the younger stud in the group for the crickety older guy who was attractive in an, “I’m drunk, you’ll do” sort of way. Which brings us to…

Why didn’t Chris Evans take his shirt off?

I like Chris Evans. I am stewing on a whole post devoted to him. So I don’t want to say too much here, but…he never

took his shirt off. Sure, there was one scene where he got down to his undershirt (conveniently skin tight) and boxer-briefs, but why didn’t that shirt come off? Does Evans want me to take him seriously as more than just a body? Well okay, I can try and do that. But Chris, honey, please. You’re ludicrously hot and you’re in this campy comic book movie—this is not the vehicle for me to admire your acting skillz. This is the movie where I bliss out on your giant guns and twelve-pack abs. But speaking of those acting skillz—Evans is a mighty pleasing role player in movies like this. Witty, charismatic, with great comic timing, he’s a solid funny man in an ensemble. And he was by far the best part of The Losers. The scene where he walks into the enemy corporation and jacks their mainframe was the best sequence in the movie. As one friend put it, “Evans was easily the most charming part of the movie.” If only he would’ve taken his shirt off.

Zoe Saldana is quite possibly the most beautiful person alive

Except I can’t forgive her for this: 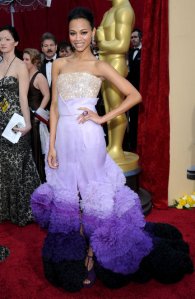 2 thoughts on “Every joke I try and make from the title of The Losers seems unnecessarily harsh.”