There’s no specific number. Studios are still setting release dates, especially for later in the year, so there’s no final list of what will be available to popcorn-eating audiences. Release dates can still change, too, so even if I want to see this movie in 2010, there’s always the chance it doesn’t get released until 2011. Especially those films I’m taking off Sundance’s schedule that don’t have distribution deals yet. Running a movie studio is for suckers. Just start a distributor and buy ready-made films from festivals. Now you have an excuse to go to Park City and Cannes every year. That’s way more fun than sitting in Los Angeles dealing with agents and lawyers and actors every day.

Do I even need to say why I want to see this? Have you seen the trailer? Not only does The Depp look amazing as the Mad Hatter, but check out Helena Bonham Carter (Harry Potter and the Half-Blood Prince) as the Red Queen and Anne Hathaway (The Devil Wears Prada) as the White Queen. The Cheshire Cat is insane, and we still haven’t gotten a good look at Alan Rickman’s (Harry Potter and the Half-Blood Prince) Caterpillar. Newcomer Mia Wasikowska is a grown-up Alice—in Burton’s version, Alice returns to Wonderland not remembering she’s been there before, but Wonderland remembers her. Two months from now we’re all going to be going, “Avatar what?” 2010 is all about Alice.

Matt Damon and director Paul Greengrass (The Bourne Ultimatum, United 93) reteam for Green Zone, which I actually thought was a new Bourne movie when I first saw the trailer. It’s not—it’s about an Army sergeant in the Criminal Investigative Division (or something like that) that goes rogue while tracking WMDs in Iraq. I worry slightly about this turning into a preachy political spiel, but there’s enough stuff blowing up in the trailer that I’ll give it a shot anyway. Damon is good at these conflicted-hero types and Greengrass is good at directing conflicted-hero action movies.

I am dying to see this movie. The Runaways were the first all-girl punk band to achieve major success, albeit mostly overseas. In America, they were considered to be little more than a novelty group, even if founding member Joan Jett has gone on to be a punk rock legend. Based on Runaways’ lead singer Cherie Currie’s autobiography, The Runaways is the feature-film debut of music video director Floria Sigismondi and stars Kristen Stewart (Adventureland, Twilight), Dakota Fanning (War of the Worlds, I Am Sam), and Michael Shannon (Revolutionary Road). I sort of expect this to be a fairly typical rock-biopic, but for the acting to be good enough to elevate it. The artistic/production design looks fantastic—authentic without being over the top or cheesy. And yes, that’s Fanning and Stewart singing the band’s signature hit Cherry Bomb, and Stewart tearing it up on the guitar.

There will be backlash for this film. It will either make people more curious to see it, or it could kill it—hard to tell. But it’s too inappropriate not to generate some kind of horrified reaction from someone. Of course it looks wildly hilarious. Nicolas Cage, Christopher Mintze-Plasse (Superbad), Chloe Moretz ([500] Days of Summer), and Aaron Johnson (nothing I’ve ever heard of) star in this comic-book adaptation about regular kids become superheroes—with no superpowers.

Robert Downey, Jr. (Sherlock Holmes) reprises his role as Tony Stark, plus Mickey Rourke (The Wrestler) as Whiplash and Don Cheadle (Ocean’s 11, Hotel Rwanda) assumes the role of Rhodey/War Machine. Toss in Scarlett Johansson (Vicky Cristina Barcelona) as another villain and Samuel L. Jackson as Nick Fury and this movie will be heavy on the badass. Don’t ask me what the plot is though. Can’t make heads or tails of it from the trailer. It just looks awesome. And how did I not know that Paul Bettany (The Young Victoria, Legion) voices Stark’s computer system Jarvis?

Russell Crow, Cate Blanchett, and Matthew Macfadyen (Pride & Prejudice) star in Ridley Scott’s reboot. Think Gladiator but with bows and arrows. The trailer looks pretty cool, but most of my curiosity stems from that which isn’t. Christian Bale was supposed to play Robin Hood, and Crowe the Sheriff of Nottingham, but Bale dropped out because of…well let’s face it, it was conflicting tempers. Can you imagine Crowe and Bale on the same set for four months? YIKES.

Mildly obscure DC Comics character Jonah Hex—the bounty hunter dude with the scars. It’s a Western, and it stars the awesome Josh Brolin (No Country for Old Men). I’m in. John Malkovich and Michael Shannon don’t hurt either, but I am deducting point for the presence of Megan Fox (Transformers). She’s guaranteed to kill every scene she’s in stone dead. Hopefully the action and Brolin’s Hex can stave off Fox’s terrible-actress cooties.

Get off my case—I do want to see this. I have a sick fascination with the Twilight movies. They’re not good, yet I can’t look away. Kristen Stewart, 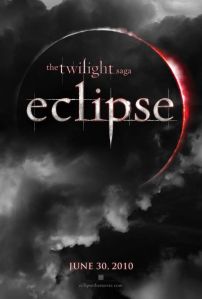 Robert Pattinson (Harry Potter and the Goblet of Fire), and Taylor Lautner (no idea—he’s like 12) return as the most cock-blocked/blue-balled love triangle that features humans, sparkly vampires, and werewolves. I don’t have exceedingly high hopes for Eclipse, but it has the highest budget yet of any Twilight movie (rumored at $60M-$70M) and benefits from having David Slade (Hard Candy, 30 Days of Night) at the helm. It also has the best plot in the series, featuring rampaging vampire armies and vampire/werewolf brawling. Am hoping Slade can pull something halfway decent and maybe mildly thrilling out of his bag of tricks.

This is another one with a nonsensical trailer. But it stars Leonard DiCaprio and Ellen Page (Juno), and is directed by Chris Nolan (The Dark Knight), so I will see it, even if it looks like it won’t make much sense and will give me a headache trying to figure it out.

Can you imagine this pitch? A comedy set in medieval times about a slacker prince and his dragon-slaying brother going on a quest to save their dad’s kingdom. Erm…okay. Except it stars James Franco (Milk, Pineapple Express), Danny McBride (East Bound and Down), Zooey Deschanel ([500] Days of Summer, Elf), and Natalie Portman (Brothers, Garden State). Franco and McBride were hysterical in Pineapple Express, Deschanel is quietly very funny, and Portman is lately expressing an interest in coming down from her high horse and actually being likeable. I have faith in a script co-written by McBride. Will it be earth shattering filmmaking? No. But it will be funny as hell.

Needs no introduction. It’s the first installment of the final Harry Potter. Harry, outside the walls of Hogwarts, with no Dumbledore to help him, fighting Voldemort with Hermione and Ron at his side. Please. Will be epic. Just wondering where they cut off for part 2…

Movies with no official release date

James Franco stars as poet Allen Ginsberg as he defends his most famous work, Howl, in an obscenity trial. Also starring Jeff Daniels (Away We Go), Mary-Louise Parker (Weeds), John Hamm (Mad Men), and David Strathairn (Goodnight and Good Luck), this is all about the acting. If it’s even halfway decent, with a world premiere at Sundance later this month, Howl could end up being one of the awards-season gems in late 2010.

The Tree of Life (Plan B/Apparition)

This is supposed to come out this year, but it’s directed by Terrence Malick (The New World), which means it could be out this year

or 2015. He tinkers and tweaks FOREVER. But the end results are always worth it. Starring Brad Pitt and Sean Penn, it’s kind of a “heart vs. head” story. Should Jack O’Brien follow his mother’s example of self-sacrifice and putting others first, or his father’s worldview of “to thine own self be true”? There’s no way to tell how this comes out. Malick is impossible to predict, but he rarely disappoints.

Error: Twitter did not respond. Please wait a few minutes and refresh this page.